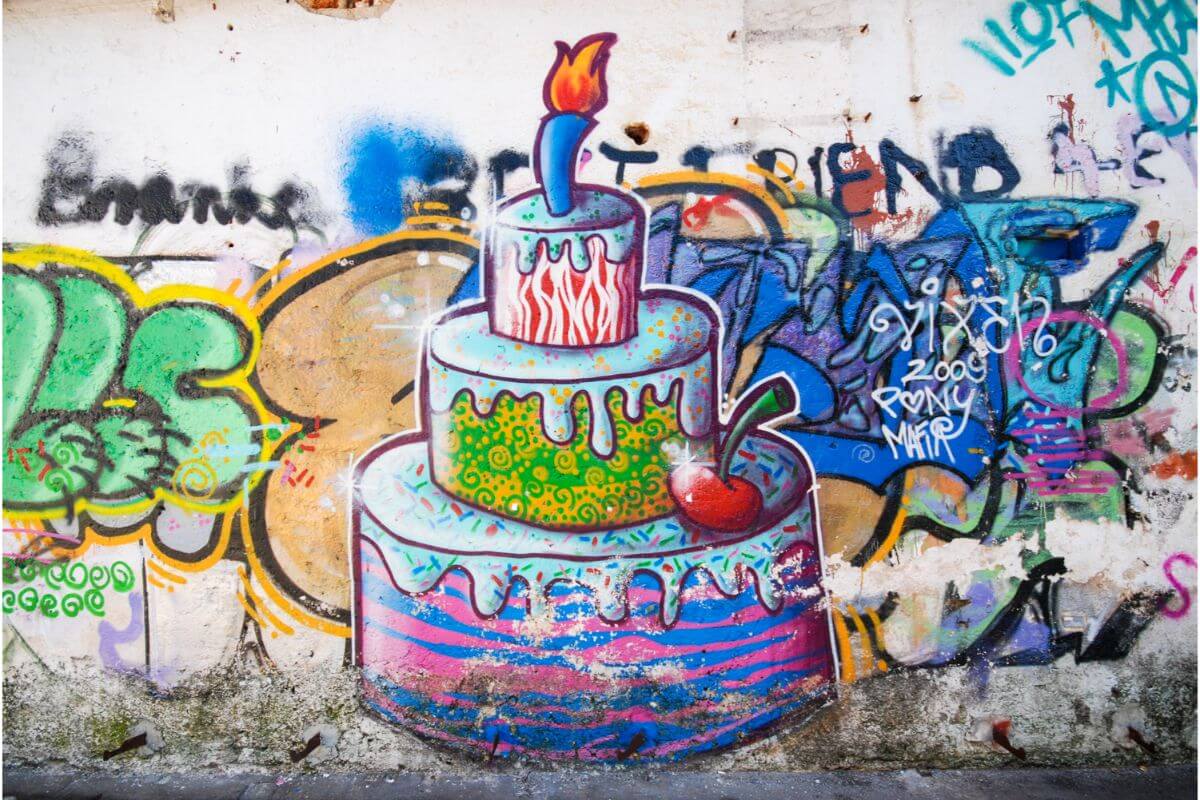 We continue our series of stories on graffiti women for the GraFEM blog with a legendary writer! Vixen is known to anyone who has ever seen her plump green birds or rounded pink ponies on walls around the world. She came late to graffiti, doing her first ones at the age of twenty. Under the crew name Pony Mafia, she and fellow graffiti artist Ovca (the name translates as the Sheep) left their mark on many towns in Slovenia and other countries. She was the first Slovenian graffiti woman to turn her hand to trains. When she first started, she didn’t know any other female graffiti artists, so she had to learn as much as possible on her own. Spray painting gave her confidence and taught her perseverance and discipline.

She decided on her graffiti moniker after an intense brainstorming session with a friend. “Vixen, a female fox, was just the right name for me,” she says with a smile. “Ms Fox is smart and she is active at night. She always escapes from the crime scene and is never caught.” As a girl she collected plastic ponies, so it is no surprise that the crew she set up with Ovca was named after her childhood hobby. Later, a few more graffiti artists joined them – Esso, Rone84 and Naive – though the crew no longer exists in this form. What remains is the name Pony, which she has been using, along with Vixen, for the last few years.

Her graffiti journey began when she was a student. “Two friends I used to hang out with often did graffiti. They tagged a lot, but they also created in their art studio, where they kept a good supply of spray cans.” One day she asked one of them, Seos, if she could have a go at graffiti. “He wouldn’t let me, although it wasn’t clear to me why,” she says. “He told me I’d become addicted to spray painting, but I didn’t believe him.” He pressed a spray can into her hand and she painted one of the blank canvases in the studio – and was absolutely enthralled.

Whenever they met up after that she would practise, using the leftover paint he gave her. “I became totally obsessed with spray painting,” she says. Later, Seos stopped doing graffiti and she started hanging out more and more with other writers. These were mostly from the Egotrip crew, who had a unique approach: everything they did was rooted in ego. “If you’re an egotripper you’re an egotripper and you don’t need to prove it to anyone. So in the Egotrip crew we always took the view that you didn’t need to be invited to become a member – if you were good enough you’d have enough ego to just join. This has always struck me as a great idea.”

Ovca was her best friend at the time. They were studying at the same college and it was Vixen aka Pony who got him into graffiti. “We would urge each other on, even when one of us didn’t feel like going out painting. We usually did it late at night, even though we knew we had college in the morning. Yes, there were a lot of sleepless nights,” she recalls.

Hanging out with the graffiti community has brought her many new friends, not only in Slovenia but around the world. Through graffiti she met all sorts of interesting people and travelled much of the planet. “When I go to a new city, there’s usually someone who paints among the contacts I’m given. There’s a special bond between writers that’s difficult to put into words.” Pony likes to say that graffiti has shaped her and given her a sense of belonging to a community. She has formed deep friendships with many other writers, both male and female, some of which go back more than 15 years.

Her family and friends always knew what she was doing, and supported her. She has always taken her graffiti creativity seriously and been completely committed to it. “I’ve put a lot of time into this work and my spray paint has always been bought with my own money.” Although her family didn’t like her tags and never understood them, they loved her birds and ponies. Her parents and sister were always worried that something might happen to her out there, though, or that she would get into trouble with the law. “But so far I’ve never had any problems whatsoever with the authorities,” she says.

“Some countries have special police departments hunting for graffiti writers,” she continues. “Undercover police officers take photos of everything and keep photo archives of the graffiti and tags they’ve found. If writers are caught red-handed, or even just suspected, they get hit with a house search.” This is why graffiti artists do not usually keep photos of their work on their home computers, she says. She even knows some writers who never search online for anything related to graffiti from their own homes, since that would leave a trail that could lead to incrimination and arrest.

Years of experience have taught her what to think about before heading out to do graffiti. “If it’s going to be very dark, I arrange my spray cans by colour beforehand and memorise where I have put what. I used to sketch graffiti at home beforehand and learn it by heart. These days, though, I often improvise on the spot.” She is experienced enough to know how to dress and how to act. “In countries with strict graffiti laws, I do everything in gloves and I also clean any fingerprints off the spray cans before throwing them away.”

The fact that she is a graffiti woman rather than a graffiti man may have saved her from several direct brushes with the police. “If you’re wearing a skirt and carrying a cute handbag, it would never occur to anyone that you’re about to do some graffiti and your handbag is full of spray cans,” she smiles. “If I ever needed to run away, I’d just hide behind a corner, take my cap off and let my hair down. They’re not usually looking for females, so I’d probably get away with it.” One evening she was out spray painting, watched by a pregnant friend, when a police van slowly drove by. “It probably never even crossed their minds that I was painting. We were just two young women chatting in the street, so there was nothing remotely suspicious about us.”

She likes to point out that, in her view, doing graffiti is a form of freedom. “Some people might call it vandalism, but my spray painting doesn’t harm anyone. I’m also well aware of where I am and am not allowed to paint,” she states firmly.

She learned to paint with the help of some friends. “The internet didn’t exist when I was starting out. My friends gave me a few pointers, but everything else was down to experience and work.” She was afraid to go painting on her own at night at first, and preferred it if someone went with her. Even though graffiti is generally thought of as a male preserve, she says that male writers have always supported her and included her in their projects.

“The boys are pretty territorial. I never really understood that. There’s also a lot of rivalry between friends – competing to see who can do the most or be the best. That used to get on my nerves a lot. As soon as you mention graffiti, the testosterone fires up all over the place and there’s a lot of machismo. But they’ve always made me welcome.” One or two of her male peers might not have trusted her to paint trains while she was still a beginner, however. She acknowledges that she was a little slow at first, since she didn’t have the experience, but over the years that has changed dramatically.

She was always strong-willed, too. “When I decide to do something, I can move mountains, no matter how stubborn I have to be. Whenever I had to do any climbing, I always did it by myself. I never wanted to ask for help and I never needed approval from the boys.” But even though she preferred to rely on herself, she always knew the boys would help her climb or pull her up if she needed them to. “We’ve always helped each other in the crews – we’ve never left anyone behind.”

Recognition for a job well done

She used to like spray painting legal walls because that way she could hang out with other writers, practise her painting skills and learn new techniques. She doesn’t do that anymore, though. These days she is mainly interested in trains, mostly underground, but some overground ones too. “Trains have become my favourite canvas. Painting them is nothing short of a mission for me. It’s also made more interesting by the fact that it involves a lot of obstacles and a huge amount of adrenaline. It’s usually much harder to paint trains than it is to paint city walls, so I see them as a special kind of challenge,” she says. “Those huge iron structures fascinate me. It gives me an insane thrill to see trains covered in my graffiti all over the place, even in other countries.”

She adds that it’s not hard to identify the author of a particular work of graffiti. Not only does each artist usually have their own unique style, but they also work in specific dimensions. “My graffiti is usually smaller and positioned lower than that of my friends,” she says, adding that the colours can also be a clue as to whether the graffiti came from the hand of a woman or a man: “Even though men are increasingly using pink, there aren’t many who would use it in colour combinations that are perhaps more typical of women. Plus the girls’ motifs are usually cuter.”

Pony describes her style as cheerful and positive, bordering on the childish. “I’m just like my graffiti – cheerful and positive. I really like colours and anything colourful.” Even though she is proud of her work, she reveals that at one point she wanted to change her street name. “I’ve always wanted to be recognised for the quality of my work, rather than just for being a girl,” she says. So for a while she considered adopting a more neutral nickname and maybe even modifying her graffiti style a little. In the end, though, she didn’t do either of these things, choosing instead to remain true to herself and maintain the authenticity of her expression. And over many years of practice she has perfected her painting skills and developed unique forms of lettering, while continuing to incorporate her distinctive characters into her graffiti.

She lives a double life now, she says. “During the day I go to work, at night I go out painting.” It’s harder to reconcile spray painting with everyday life these days, as she has more responsibilities than she used to: “If they caught me and sent me to jail for three days, that wouldn’t be acceptable to my employer.” She used to be laid-back, but now she has to put a lot more thought and organisation into her painting preparations. Most of her friends of her age have given up doing graffiti due to other life commitments, but Pony feels it is a greater challenge to keep going: “Part of me is afraid to quit, but I also really don’t want this story to end,” she says, adding that she is driven by adrenaline and the urge to explore. So, if she can, she still travels to other countries at least once a month to spend a few days painting trains there. “When you take on something that’s virtually impossible and succeed at it, it’s an insanely fantastic feeling!”

GraFEM is a co-production of Urbana Vrana Institute and RogLab.