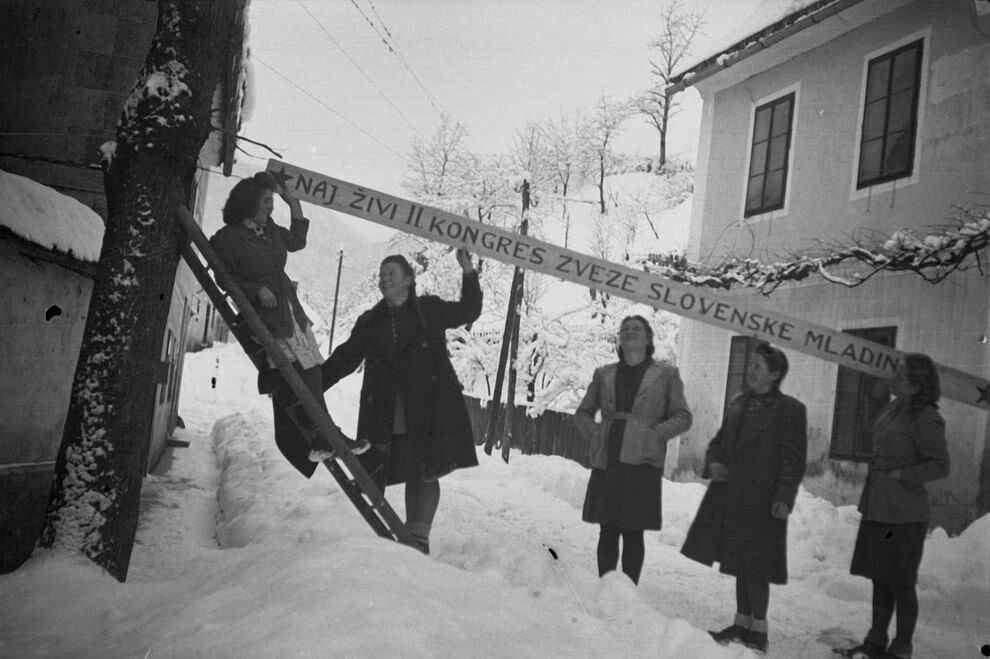 Ljubljana probably experienced its first flourishing of what we would now call political graffiti and street art under the Italian fascist occupation of 1941 to 1943, when movement was restricted, a curfew was in force and popular protest was suppressed. Acts of rebellion within the public space were largely carried out by women and included graffiti, leaflets, the defacing of posters, mass rituals and numerous acts of sabotage. These women’s activities formed part of a nationwide popular resistance that had begun with anti-war demonstrations before the war and later turned into a highly organised “state within a state” with its own liberation army.

In Part One of this two-part article I shall present the broader political context within which women in Slovenia created political street art during the war; in Part Two, I shall present the personal testimonies of some of the women involved, showing what these activities entailed in practice.

Resistance can be found in the hearts of people of all ages, genders, beliefs and other social groupings, but young people are usually most open to daring acts of rebellion. That was also true of the street resistance during the war. Unfortunately, the historical sources provide very few details about how and by whom these activities were carried out and their consequences. As Alenka Šelih notes in her preface to the cult feminist anthology Pozabljena Polovica (The Forgotten Half), about important female figures from Slovenia, “There is also a wider lack of information about women who, within the limitations of their circumstances and times, went beyond the boundaries of their personal lives to add value, share their worldview with others and try to improve the environment and conditions in which they lived.”[1]

Despite their lower social status, women and girls in Slovenia played an extremely important role in the dissemination of progressive ideas. They were the main enlisters of public support for the 1917 Majniška Deklaracija (May Declaration), for example, whereby the South Slavs in the Austo-Hungarian parliament in Vienna demanded unification into an autonomous unit within the multicultural monarchy. Women campaigned for this throughout Slovenia, collecting about 200,000 signatures and demonstrating both efficiency and political acumen. As Alenka Puhar points out, politically active women such as Angela Vode played a significant part in modernisation and improvements to the quality of life after 1918, when the South Slavs officially united into the Kingdom of Yugoslavia in the wake of the break-up of the Austro-Hungarian empire.[2]

Women developed “their own strategies of political agency, even when they were excluded from political activities. Their formal involvement in charitable activities, especially, was a key contributor to women’s participation in political processes between the two world wars. Their professional charitable work ensured their formal representation on various expert committees and gave them influence in the formulation of legislation.”[3] The more progressive women’s societies, along with the women’s sections of workers’, educational and cultural societies and economic and political organisations, strongly supported the “revolutionary” work of left-wing forces. Indeed, women have played an important part in  the Communist Party of Yugoslavia ever since its formation in 1920. In the early 1960s, Vida Tomšič, arguably Slovenia’s most important communist leader, wrote, “In many revolutionary conflicts even before the national liberation struggle [of the second world war], it was women and their determination that gave depth and perseverance to many of the strikes and actions that took place in Slovenia and across Yugoslavia at that time.”[4]

Political graffiti with its impactful succinct slogans and stencilled images of the kind still used for this purpose today first appeared in Italy as fascist street propaganda in the 1920s. Of all the places lived in by Slovenians, it was the region of Primorska where fascism made itself felt most strongly, since it had been annexed to Italy at the end of the first world war. In the course of violent attacks in 1919, fascists set fire to the Slovenian Workers’ Hall in Trieste; in 1920, they did the same to the Slovene National Hall there. According to Andrej Ferletic, the fascists carried out more than 120 attacks, destroying and setting fire to Slovenian workers’ institutions, printing houses, editorial offices, companies and halls.[5] Fascist slogans and symbols such as the fasces (an axe emerging from a bundle of wood) were painted on the walls of local houses. Black paint was used for this, to match the colour of the fascist shirt. One of the fascists’ most notorious actions was in 1927, when they painted insults, threats and a large skull and crossbones on the façade of the archbishop’s palace in Gorizia. Similar actions were carried out in other coastal towns and villages.

Research by Milica Kacin-Wohinz has shown that the Slovenian and Croatian popular resistance in the Julijska Krajina (Giulia) region – specifically, the activities of the Slovenian clergy and group TIGR (standing for Trieste, Istria, Gorizia and Rijeka), who were prepared to die for the cause –  was the first example of anti-fascism in Europe.[6] Individuals and organised activists alike fought back against Italianisation and fascisation by removing Italian flags, replacing Italian signs with Slovenian ones, distributing pro-Slovenian leaflets and organising armed attacks on the fascists. Graffiti demanding the annexation of the Julijska Krajina region to Yugoslavia also began to appear en masse.[7]

The first activists of the secret organisations TIGR, Borba (The Fight) and Črni bratje (Black Brothers) were men, or rather, boys. Women initially worked in the background, but as time went on they had to take on the more exposed roles too, including positions of leadership. “In some areas, political and resistance activities would not have been possible at all without women. Key examples here were Ljubljana and Trieste, where it was almost impossible for men to carry out legal or even illegal work.” [8] The main anti-fascist resistance in occupied Slovenia was led by Osvobodilna Fronta (OF – Resistance Front), an association of political organisations with the Slovenian Partisans forming their military arm. The OF was set up at a clandestine meeting held in Ljubljana on 26 April 1941. The violence of the occupiers in the early years of the war led to numerous demonstrations in Ljubljana, demanding improvements to living conditions; these demonstrations were organised by the OF and were mostly attended by women.[9] Women and young people also took the places of male activists who had been arrested.[10]

Before the second world war women were excluded from many professions, were paid less for the same work and, as a rule, were not able to hold senior or management positions. They were wholly excluded from official political life. “They did not have the right to vote and all three branches of government – legislative, executive and judicial – were closed to them.”[11] It should be noted, however, that women’s activism in Slovenia existed even before the military occupation. Teachers played a prominent role here, since this was the profession women were most likely to train for and it gave them a way of being publicly active. Women had by then also become established in a number of fields that had previously been closed to them, including law, medicine, and academia.[12]

With the outbreak of the war, the role of women changed even more. Once the men had been interned or sent to camps, women had to take over their tasks too, and so the burden on them increased greatly. “They became the protectors of families and the carriers of economic activity.”[13] In the territories liberated and governed by the OF, a number of formal measures were implemented to prohibit gender inequality, and this made a significant contribution to overcoming traditional gender norms. Even though it was only with the change of political system after the war that women in Slovenia were finally given the legal right to vote, the clandestine publication Slovenian Reporter had already stated on 2 June 1942 (issue no. 23) that “Elections are being held everywhere for seats on the national liberation committees, which will take all power into their own hands. All men and women from the age of 18 have the right to vote and to stand for election.”

Despite the revolutionary social changes taking place in the liberated territories, the storm of war in Slovenia was intensifying. Ljubljana was encircled by barbed wire, so activism was immensely important. Clandestine work was carried out mainly by women because the fascists were less suspicious of them than of men. They amassed weapons, food and medical supplies, provided venues for meetings and gave shelter to refugees and the anti-fascist activists known among the Slovenian community as Ilegalci (a positive term meaning “the Illegals”). Women also performed courier and intelligence work. They spread the idea of liberation by distributing illegal literature and seeking out new supporters of the OF movement.[13] Mothers often supported their children’s activism, despite knowing the dangers. These and other acts by women during the war not only testified to their incredible courage but were also an important boost to the morale of other activists and partisans.

So what role did female OF activists play in anti-fascist street creativity? Zora Konjajev, PhD, doctor and lecturer in the Medical Faculty of the University of Ljubljana, described the actions of street activists to me in detail shortly before her death. Having been born in the Primorska region of Slovenia, she was well acquainted with the consequences of fascism even before the occupation. In 1941 she immediately joined the OF and started carrying out a range of high-risk activities. After being betrayed, she had to flee Ljubljana and became a medical auxiliary with the partisans.

There were female activists in all the original organisations that formed OF. At first, the one that focused most on the “women issue” was Jugoslovanska ženska zveza (Yugoslav Women’s Union), but this organisation was soon excluded from the OF and replaced by Anti-fašistična fronta žensk (AFŽ – Women’s Anti-Fascist Front). Women were involved in the planning and execution of highly challenging OF resistance activities, including several legendary street campaigns.

If we are focusing on graffiti and other street-art-related activities, we need to begin with an event that took place in the first year of the war: on 1 October 1941, the first day of the new school year, every high school in Ljubljana was covered in resistance slogans and symbols, many of them in brown chalk. In some classrooms, portraits of Mussolini were smashed or plastered with chewed paper. This and similar campaigns were carried out by students under the leadership of Zveza komunistične mladine Jugoslavije (ZKMJ – League of Communist Youth of Yugoslavia).[14]

Listening to Zora Konjajev’s stories of the war and researching other sources, what touched me most was the story of Vida Janežič, after whom my former school, now the Poljane High School in Ljubljana, used to be named. I must therefore share the story of the brave Vida with you. However, since I am running out of space, I will have to come back to it next time, in Part 2 of this article on Slovenian political street artists in the second world war. In the meantime I wish you a very happy 27 April – the Day of the OF aka the Day of Uprising Against Occupation!

Cover photo by Edi Šelhaus featuring members of the Zveza Socialistične Mladine (League of Socialist Youth) hanging the ‘Long Live the 2nd Congress of the League of Slovenian Youth’ banner in the village of Osilnica in the liberated territory before the start of the 2nd Congress of the LSY, 1945. Archived at the Museum of Contemporary History of Slovenia in Ljubljana.

GraFEM project is run by Urbana Vrana Institute in co-production with RogLab.