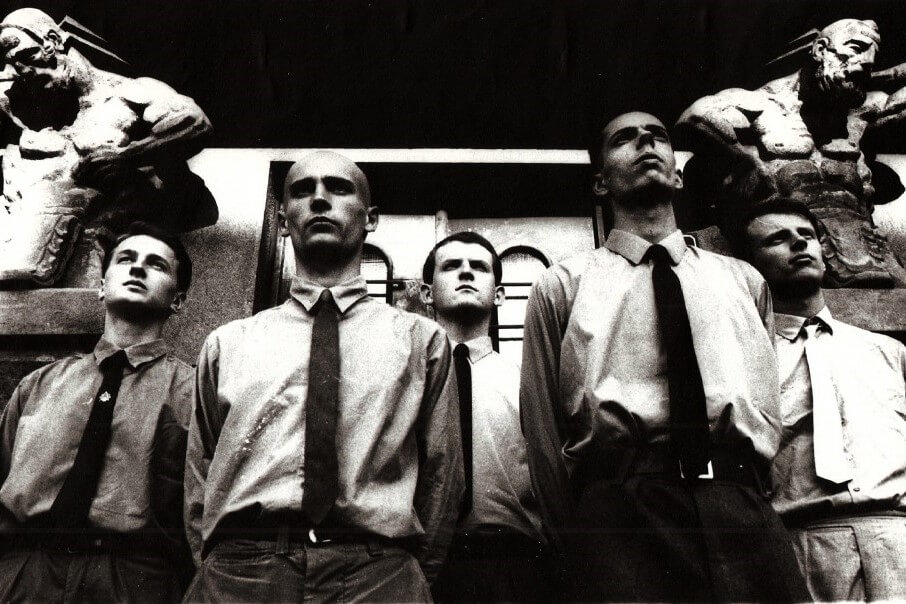 Laibach is the German name for Ljubljana, the capital of Slovenia. It is however also the name of a controversial music group formed on 1 June 1980 in Trbovlje, Slovenia, which at the time was part of socialist Yugoslavia. Laibach were the predecessor, and the musical section, of the influential 1980s art movement Neue Slowenische Kunst (New Sloveanian Art). Initially one of the founders of martial industrial music, Laibach later changed their musical direction to a crossover influenced by rock, pop and techno.

Laibach, from its very beginnings, have been accused of both right-wing and left-wing extremism and, from 1984 to 1987, the authorities in socialist Yugoslavia banned the band from performing in public and using the ”Nazi” name Laibach. Even after the fall of the Berlin Wall, the group remains controversial on several continents, thanks to its provocative videos, political addresses before concerts, medleys of national anthems of countries that don’t like each other, specific slogans and visuals, ambiguous criticism of nationalisms, questioning of religious organisations and rituals, equating democratic regimes to totalitarian ones and playing shows in places where relevant political turmoil is happening. Oh, or touring in North Korea of all places.

In addition to artists like Umek and Gramatik, Laibach are currently Slovenia’s most notable musical ambassadors. Laibach’s impact on Slovenian and ex-Yugoslav music scenes is immense and the group is held in very high esteem in alternative music circles all around the world. Its ethics, aesthetics and politics have been the subject of multiple studies and doctoral degrees at various universities.

In the past, the members of Laibach made public appearances only as a group, never as individuals. Even though this has changed and Jani Novak now often speaks in the name of the entire group, the statements remain provocative, multifaceted, ambiguous and humorous. They don’t shy away from discursive repetitions and reinterpretations of texts by other artists, theoreticians or Laibach itself.

The latter fact was what prompted me, years ago, to write a text that looks at Laibach from a new perspective. When my then editor asked me for an article on Laibach, my initial response was that everything had already been written about the group and that I don’t have a single clue how to tackle the assignment. And then it struck me. I’ll write an article about Laibach that will consist of a collage of statements by the group about itself from various past interviews.

The idea was to usurp Laibach’s own creative method. In its statements, but also in its music and visual art, the group challenges the concept of authorship by adapting, reinterpreting and appropriating works by other artists and writers. Why then couldn’t someone else tinker with combining Laibach’s as of yet unrelated utterances and turning them into a new work, a critique of Laibach itself for example? Well, that’s exactly what I did. Multiple times! But why did I consider it so important?

Because Laibach are not, of course, Slovenia, just as Slovenia is not Laibach. The chief irony is in the fact that Laibach are not a Slovenian export but primarily an import. Their main record label is UK-based (Mute/EMI) and the majority of their albums have been released abroad and imported to Slovenia. Being a band with content, an elaborate strategy and a recognisable ‘brand’ has long required something more than merely a group of four or five guys doing something; it requires constant action and includes a large number of collaborators, a lot of coordination and organisation and a huge amount of will power and hard work.

The members of Laibach have become a co-dependent part of the machinery that they set in motion way back in 1980 and, just like all the others, they have to get their heads down and work. It has never been their intention to swim against the mainstream. They prostitute themselves intelligently and with more refinement, so that it stinks as little as possible. After all, they have already sold a million records. Why shouldn’t they sell a few more? In the end, all of us first build a material foundation in our lives so that on it we can create the conditions for a superstructure. And this superstructure is the exercising of personal and collective freedom.

These days alternative groups turn to big record companies for protection, but they don’t want anything to do with them, because anyway they don’t sell enough records to make any serious money. Except of course if they don’t strum the tune that the dictates of the market and the major labels would like. Laibach, though, are not burdened by any especially protective attitude towards their music. They don’t believe in the originality of authorship and even claim that plagiarism does not exist. Since they do not consider themselves proper, traditional ‘musicians’, they have never seen music as something untouchable. At most, it has been one of the languages they have used in their ‘social’ campaigns and performances. This is more or less the situation even now. Perhaps they really are merely good enough.

I sincerely believe that there is no other group from this part of the world that has actually done as much. I am not sure if they can exactly be said to have done it for ‘Slovenian music’, but there is no doubt that they have done a great deal for the promotion of Slovenia. It is also true that no other Slovenian group or performer has released and sold as many records as they have – if this is a relevant criterion. (Except of course the Avsenik Ensemble, who are a unique international phenomenon all of their own.)

Essentially, what they are is a kind of social institution, engineers of human souls, operating in the framework of popular culture. This language has still not been completely decoded, which means that it can still function. Like in the case of Atomik Harmonik’s single Brizgalna brizga and album Brizgaaaj – it is not something one thinks up just like that. Some other consideration, not merely vulgar profit, could be at work here; there might even be something socially subversive about it – and I mean that in a positive sense.

Yet more proof that anyone can be Laibach, even those who are just about ‘make up’. You see how things are actually banal and simple: all you need to do is put on a suitable mask, pull the right strings, and already people accept you and follow you, even though what you are telling them is totally devoid of meaning.

The utopian projection of individual success and personal freedom (the realisation of the ‘American Dream’) is carefully guarded and cared for in the corporate industry of the consciousness by the ranks of anonymous individuals who project their own desires, energy and fantasies into a kind of collective substratum (brands, athletes, film stars, TV personalities, pop stars, royal families, Lady Di, etc.) and then draw on it themselves.

Bregović sells the West the stereotypes of the romantic Balkans. Laibach, on the other hand, balkanises the romanticism of stereotypes for the same West. Nazipop icons? Ingenious! The impossible is possible. When Laibach are in the game, everyone thinks that they have to see something more than there actually is. They have already manipulated their audience to such a point that now what the audience mainly asks of them is demanipulation. Manipulation of the manipulation. Because history goes on and mercilessly devours its children into the bargain.