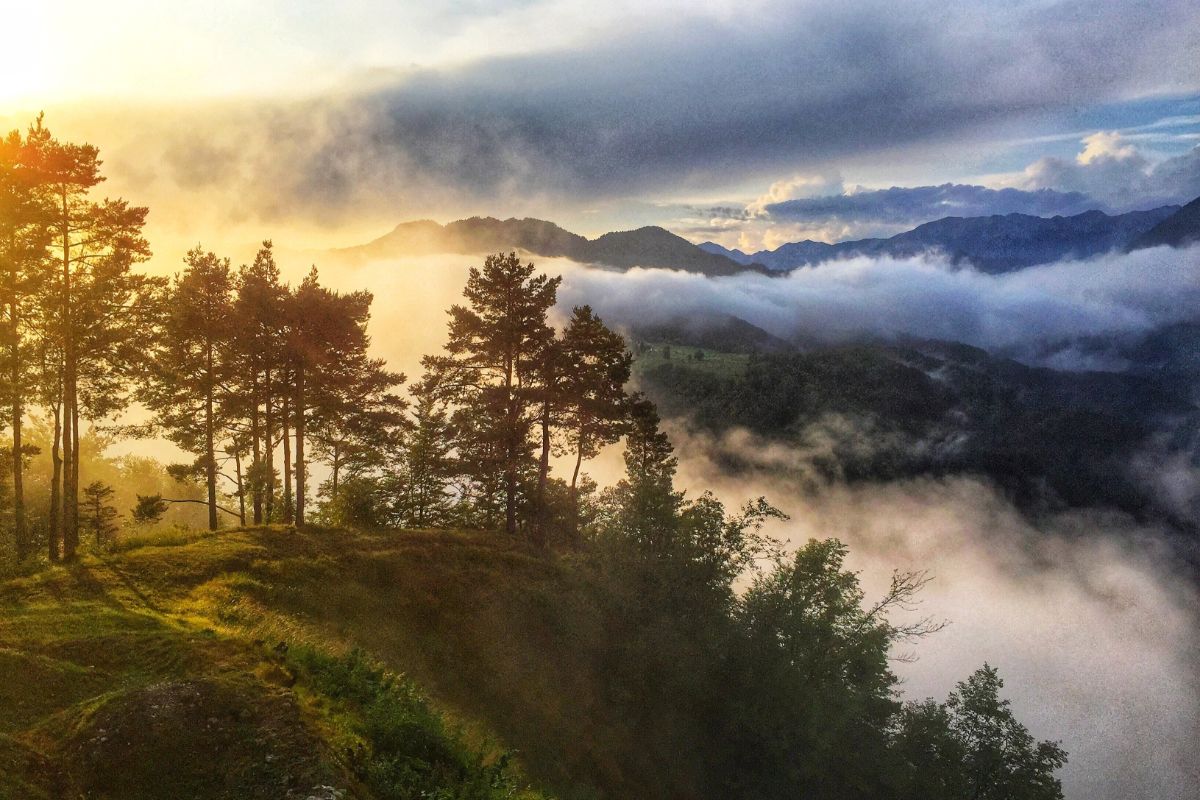 The one thing I always notice braving the serpentine-like winding roads from Ljubljana towards North Primorska region is the dominance of green. And blue. All shades of green and blue. Lorca would appreciate it. There seems to be nothing but “verde te quiero verde” – green woods, green meadows, green pastures, green trees, green grass. I hear you say: but there’s nothing like the Irish green. I beg to differ.

Instead of a steady, constant dose of rain from the Atlantic wetting the earth’s canvas, the subtle and wild nuances of this particular green are created by battering torrential rain, storms, showers, scorching sun, snow blanket, random periods of draught or abundance of precipitation. This is green with a sturdy character, like the protagonists from the poems written in the local Poljanska dialect by Janez Ramoveš, put to music by his wife Uršula Ramoveš and Fantje z Jazbecove grape/Lads From the Badger’s Ravine. You might spot one of those individuals in the fields, by the road or most likely – in a local bar – when driving across the Poljanska valley towards Cerkno or Tolmin via Škofja Loka.

And then there’s the colour blue, reflecting the skies and the water veins on the ground in cerulean, cobalt, azure, teal, sapphire, cyan, and turquoise. Turquoise is the colour of river Soča/Isonzo, cutting through the rugged, wood and stone terrain of North Primorska like some mythical green-and-blue serpent. Besides providing a home to many local flora and fauna, Soča also hosts nature lovers, fishermen, water-sport enthusiasts and music festival goers from all corners of the world.

Sotočje near Tolmin, the place where the turquoise blue of Soča and sapphire blue of the river Tolminka meet and merge, has been a site for many music festivals over the past two decades, starting with Sajeta – locally coordinated artistic creative camp now in its 21st year. Their example was followed by a plethora of diverse music genre festivals, followed by the biggest crowd-pulling ones such as MetalDays, Punk Rock Holidays, and others that sprung, blossomed or withered over the years among the ubiquitous blue and green.

Soča has been immortalized and venerated by the poets as well. The 19th century minister and poet Simon Gregorčič wrote an ode to the turquoise river, calling it “a splendid, limpid daughter” and describing her distinctive colour scheme as “the dark green of highland grass and the cheerful azure of the heights”. But his Soča also contains a premonition of red: “Around you hail of lead, rain of blood and stream of tears … You will flow full of blood.” The song was written more than three decades before the WWI that changed the landscape of this region forever, as the 2,5 years of the battles of Isonzo/Soča between the Austro-Hungarian and Italian armies took more than one million lives.

Red was also the colour associated with the resistance movement when the military authorities of the Italian fascist regime pre and during WWII occupied this territory. After Italian capitulation in the late summer of 1943, the town of Cerkno became one of the hubs of liberated territory, hosting the National liberation struggle forces, allied military missions and secret Franja Partisan Hospital for wounded, situated in the nearby Pasice gorge, sheltered by the blue and green of nearby forests and rivers.

Cerkno, curled in among nearby hills and mountains, grew and expanded in the post-war Yugoslavian zest for industrialization. Their main factory ETA, still in operation today (started as a foundry and gradually transformed into one of the largest manufacturers of hotplates in the world), grew from the mid-war technical partisan workshops. Established in 1947 it must be one of the longest running factories in Slovenia. The development of the factory intervened in all areas of life for the majority of the local population for many decades. Slovenian singer-songwriter Iztok Mlakar with paternal roots in Cerkno, immortalized one of the foundry workers’ strikes in a well-known and loved song Pubi, usidma se/Lads, let’s sit down from his inaugural Štorije in baldorije album (1992).

While neighbouring town Idrija pride itself on mercury mine (dating back to medieval ages, finally closed in 1995) and punk heritage, Cerkno’s ETA was also a place where two young workers – late Boštjan Cvek and Sergej Koncut met in the 80s. Their friendship, shared through gargantuan appetite for a good rock’n’roll and (later) jazz music as a way of life rather than just a little hobby, their determination, grass-roots resilience and vision, created one of the most internationally recognized and beloved jazz festivals in these necks of the woods, Jazz Cerkno, established in 1996.

Jazz Cerkno was and remains the hot spot for world-class jazz artists as well as homegrown talent and jazz aficionados. But visitors and performers don’t travel from all corners of the country and beyond for a three-day spree just because of music. They feast on the greens and blues of the surroundings, on hospitality festival organizers and other locals happily provide year after year and on the sense of community and good times they all experience and share. There are many stories to be told, by the locals and visitors alike. But I’ll keep them with mine. One does not kiss and tell.

Second half of the 1990s was also the time when the youth of Cerkno, being rather remote from the artistic hustle and bustle of the bigger cities, gathered forces and formed The Cerkno Youth Alternative Club (C.M.A.K.), bringing in bands and other cultural events based on their DIY philosophy and volunteering. One of the newest editions of the (now displaced) C.M.A.K programme is a festival called Deuje babe/Wild Hags, set up in 2013 to commemorate the International Women’s Day and thus presenting women’s artistic and cultural endeavors, promoting gender equality and highlighting feminist discourse.

The name of the festival derives from a local archeological site, a cave called Divje babe/Wild Hags where the oldest instrument in the world, Neanderthal bone flute, was found – when else than in the mid-90s, and where else than amongst the green and blue; and in the darkness of deep time. A time so distant from anthropocene it discloses itself only by digging deep into our thick layered past.

Matija Turk, an archeologist who led the excavations that unearthed this 50.000-60.000 year old instrument, wrote: “It forces us |Homo Sapiens|, who have deemed ourselves as the crown of all creation, to step down a notch and let others have some of what we have claimed for ourselves only.”

Similar notions could be applied to another type of “the Other” from this locality. Within its difficult accessible terrain, Soča valley holds many secret caves, ravines, cliffs, hollows, nooks and crannies where mythical wild women, girls or hags believed to dwell, possessing magical powers to help or harm humanfolk, depending on how the latter treated them in return for their help with field and domestic chores alike. Although untamable (and with the lack of reciprocal deeds often revengeful), these “mythical helpers” excelled in everything from cooking, baking, breastfeeding, lulling babies to sleep, to planting, harvesting, ploughing, weaving and more.

The sheer volume of toponyms as well as folktales regarding women with supernatural powers recorded in this territory is curiously abundant and no one seems to have a sufficient explanation for this phenomenon. Perhaps it is, as many folk tales indicate, a reflection of specific social, religious, economic, gender structures, customs or ways of life from some point in the distant past where women enjoyed a different status than later in the Christian age. 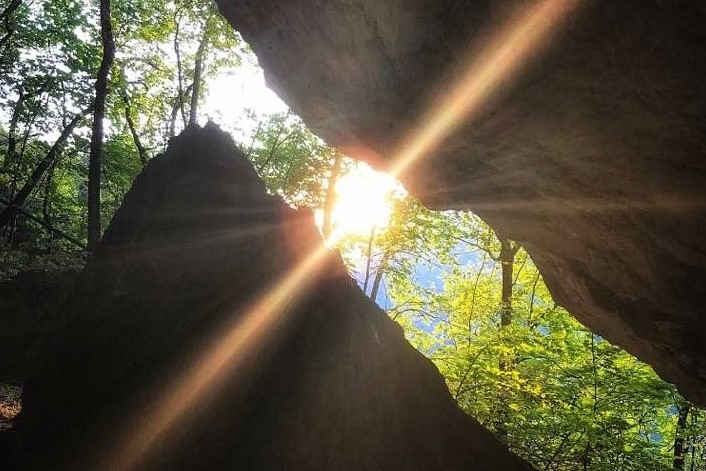 After all, this area was populated from Paleolithic onwards and proved to be a lively intersection not only geographically and climate-wise, but also regarding plethora of influences from all the people who settled the land or just passed by – from Celts and other Iron Age settlers, to Romans, Slavs etc.. Or was it fear of the power of women that begot such legends? Or maybe it had something to do with the native, pre-Christian belief of worshipping nature and its (green and blue) elements some small family clans and individuals who lived here practiced in secret for generations until mid 20th century?

We might never find out. And perhaps that’s not too bad. After all, human imagination is a marvelous tool for creating new stories, songs and music about the tangibilities of the unknown.

This is what I wrote after taking a stroll down to the Wild Hags cave – the one that’s always open to the public. I visit it as often as I can, passing the church of John the Baptist nesting on the top of a cliff and an ancient beech tree that sits next to it like a weary giant.

“Wild Hags cave is a wondrous place… Tonight the soft evening light shone brightly way past the entrance, illuminating the stalactites, stalagmites, scarlet red lichen and all the things that are usually kept in the dark. The sunrays played among the rocks, creating all sorts of optical illusions worthy of a magnificent theatre play. I stood there in awe, breathing into deep space…then I sang a bit into deep time.”

Jani Kutin, a cheese maker and a songwriter from the mountain village of Čadrg above Tolmin, deeply immersed into his local environment as a human, farmer and an artist wrote many songs in connection to his native place. One of them, recorded with his new band Bakalina Velika, carries these words “this world of ours, miraculous world, opens its door and shows me a blossom, so that I can sit and rest for a while…”

Resting among the local hues of blue and green is indeed a special state of being, or becoming, if you will.

There are rare, rare places on this planet that would hold space for all the depths, the heights, the awareness, the oblivion, the triumph, the demise, the mythology of the under and upperland so profusely, gracefully and secretly as these places do.

Places where all kinds of histories meet and communicate through wild and rich natural and human world. The connections are boundless and can be traced at every step. They urge a conversation with anyone who enters these places. Our duty is to be respectful. And to listen to the world made of blue and green and all shades in between.

Words and photos by Katarina Juvančič