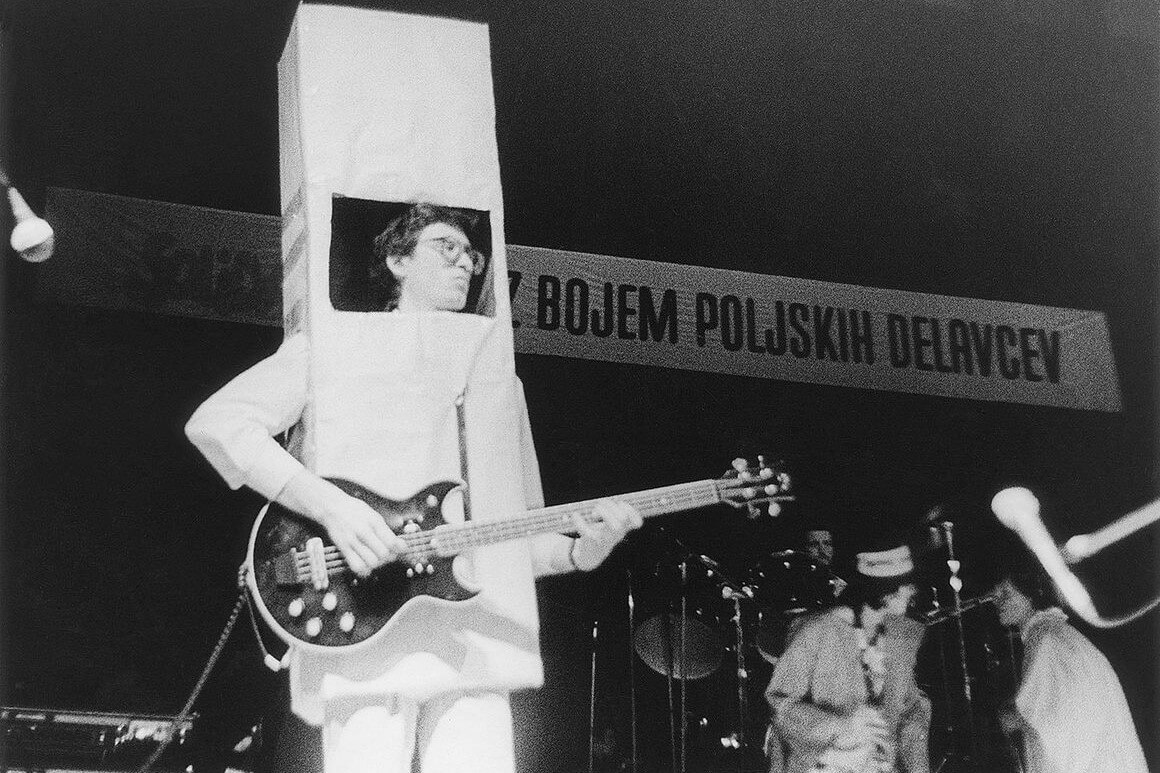 In November 2019, the P74 Gallery in Ljubljana hosted RIO: Begnagrad, Srp, D’Pravda, an exhibition that covered the work of three Slovenian bands from the late seventies and early eighties that were not part of the punk and new wave scene per se, but nevertheless belonged to a circle of alternative and independent music artists from Ljubljana.

With their subversive, progressive and out-there approaches and artistic expressions, they transcended conventional musical frameworks and added an important little piece to the mosaic of creative activity at the time. To this day, their colourful legacy remains in stark contrast to the monochrome and uptight uniformity of Ljubljana’s alternative scene in the eighties.

In Slovenia, the underground international movement by the name of Rock In Opposition (RIO) owes a great deal to Aleks Lenard, a music enthusiast and journalist who also hosted a show on Radio Študent in the mid-seventies. His articles in Slovenian newspapers and magazines played a key role in spreading the news and ideas regarding the movement which shunned the traditional workings of the music industry and established its own system. In a 1979 Stop magazine, he wrote the following:

“Only with the establishment of RIO the first steps towards a more progressive international consciousness and organisation of musical opposition were made. RIO encourages the distribution of records in various countries, organises shows, furthers the exchange of information. (…) Its main strength lies in cooperation, not competition.”

Following the example of two RIO festivals that took place in London in 1978 and 1979, Lenard helped organise the first RIO festival in Ljubljana in 1980. In the next two years, two further editions of the festival took place, one in Festivalna dvorana in 1981 and the other in the foyer of Križanke in 1982. Besides the fact that these festivals enabled local fans to meet the main protagonists of this movement in person, they also represented an opportunity for local bands to take the stage along RIO bands and indirectly become a part of the movement.

The first RIO festival took place in the centre of Ljubljana, in the patio of a pub called Rio. What a coincidence! Or was it? At the time, Rio was a popular haunt for outcasts of all sorts and the place to “meet everybody you wanted to see“, as artist Zora Stančič writes in her guidebook to Ljubljana’s former alternative spots, Zora Was Here. These days, passers by are either lured in or driven away by the smell of grilled meat from Gostilnica Rio-Momo, which occupies the spot on Slovenska cesta.

Most people are not familiar with this story, but those precious few who hung out there in the eighties like to throw a wistful glance at the big closed door leading to the abandoned patio and the outdoor seating at the back. Time has blurred the traces of an important milestone for the local alternative music scene – let’s not forget that Druga godba, a lively and forward-looking music festival that is still going strong, sprung up from the remains of RIO festival in the mid-eighties.

The following statement from Vilko Ovsenik, one of the pioneers of Slovenska popevka, very much characterised the evolution of popular music in Slovenia, all the way from its inception in the early 1960s, when Bled hosted the first edition of Yugoslavia Jazz Festival (now Jazz Festival Ljubljana) and Slovenska popevka: “If you want your music to evolve, you need to have your own festival.” These days, in the modern era of festivalisation with its “something for everyone” adage, the fact that the qualities intrinsic to festivals are still constitutive for the “development of one’s music” is all but forgotten.

My goal isn’t to break down the history of music festivals in Slovenia or to go into an in-depth elaboration of my assertion in the previous paragraph. The story of RIO festival and the lukewarm response to the aforementioned retrospective exhibition about RIO, especially in the media, reminded me of the Pop Moste Festival ’79 photo exhibition in Mravljiše youth centre in Komenda near Kamnik from 2008. That exhibition didn’t get much attention, despite it being focused on another watershed moment in the history of Slovenian rock music.

In April 1979, Rafko Lah and Milan Korbar from the Komenda Moste youth organisation posted a public announcement in the widely read Stop magazine, calling all rockers, instrumentalists, singer-songwriters and other musicians to apply at Pop Festival Moste ’79. The open call achieved its purpose and the event took place on the local soccer field on 26 May.

On the day before the event in Moste pri Komendi, a Day of Youth celebration organised by ŠKD Forum took place at the student campus in Ljubljana and was attended by five to ten thousand people who showed up to see Flam, Obečanje proleća, Na lepem prijazni, Rudolfovo, Film, Pankrti, Drugi način, Aerodrom and Boomerang. The next day, a crowd of two to three thousand gathered on the soccer field in Moste.

“Everyone came. Well, almost everyone. September, Tomaž Domicelj and Andrej Šifrer were missing. Moste pri Komendi was not quite swarming with people, so it is possible that the enthusiastic organisers will have to foot some of the cost. Nevertheless, there was fun,” wrote Daniel Levski for Stop magazine, before diving into a debate with Slovenian “punk ideologue” Igor Vidmar.

In Stop magazine they had a debate about whether Pop Festival Moste made plain division of Slovenian rock scene between hippie ideology and punk ideology. In many ways, this trivial dispute defined the scene in the 1980s and was pivotal for the future development of events within Slovenian popular music which is still characterised by unchecked friction between the so-called mainstream and the so-called alternative.

There is no question that Pop Festival Moste was a rock festival which was heavily characterised by punk. It was where punk bands and their fans took the helm for the first time. Feel the atmosphere for yourself with the help of this technically questionable but historically illustrative recording of the performance by Paraf from Rijeka, published on Croatian blog Stražarni lopov. Also, here’s a talk show with some of the protagonists of the festival (in Slovenian).

Both Pop Festival Moste ’79 and RIO festivals between 1980 and 1982 are music events that need to be brought up every so often, just so we don’t completely forget about them. They are milestones, important links in the chain of events and coincidences that formed the history of Slovenian music scene and are of great help in understanding it.

Even though I’m too young to have attended these festivals, I always cast a glance at Rio when I pass by and notice the soccer field in Moste when I’m wandering around Kamnik and I cross the road near the local school. The same goes for other places where an interesting or important event that I’m familiar with has taken place. And I’m very grateful when I learn about new ones.

Music events are part of our cultural history. Every town, every place, every house, every inch of the earth has its own story, just like every person does. Therefore, when walking around, let’s observe, ask questions and share our knowledge about what took place at a certain locale, so that we can make our own contribution, for example to the Momus music guide to the tangible cultural heritage of Slovenia.

Translated by Jaka Bulc
Cover photo: D’Pravda, at Hala Tivoli, 1981. This and all other photos: courtesy of Centre and Gallery P74, Ljubljana.