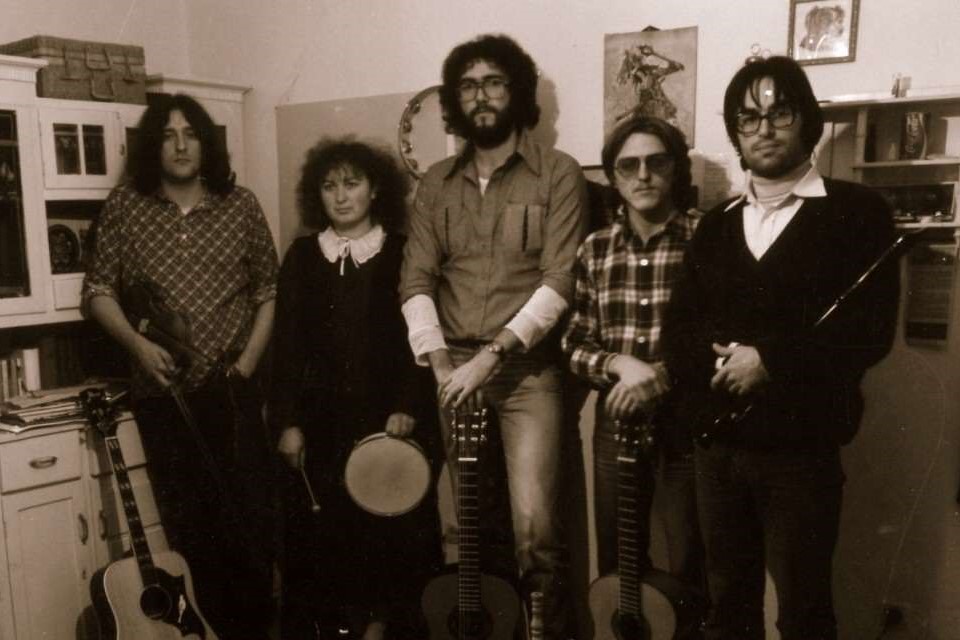 No, this is not about the birds and the bees, but about how folk music is made in a specific location. Who creates it, who discovers it, who transforms it? How and why?

Folk music is something old, something that is transmitted from generation to generation by word of mouth, something authentic, primordial, something that connects us to our nation’s past and reminds us of the good old days. Obviously, this does have a grain or two of truth to it, but at the same time these are some of the most common myths related to the perception of folk music.

Let’s turn our attention to folk music from the littoral region of Slovenia and Istria and take a closer look at what happens to myths when confronted with reality.

In the late 1970s, a group of students from the region of Primorska met on the student campus in Ljubljana and bonded over their shared love for music from all corners of the world. At the time, they didn’t know much about their local folk music and only discovered their musical backyard after a long detour through the sounds of the United States of America, South America and the Celtic fringes of Europe.

Dario Marušić, the founding member of Istranova who started doing field research on local music in his student years and managed to inspire some of his friends to do the same, says: “When Istranova was founded, 70% of the population in the Slovenian part of Istria consisted of newcomers and the first generation of children of newcomers. Many of them never embraced that culture as their own. Most of them didn’t want to, while some of them simply couldn’t bring themselves to do it. The number of native inhabitants who remained in towns was negligible, while the people in the villages were fed the idea that everything that has to do with tradition is by definition primitive and inferior. I was lucky that my family was “primitive” enough and that I got to know our local traditional music at a young age. Nevertheless, if I hadn’t discovered British and French (and in the beginning particularly Breton) folk revival, I might have never fallen in love with my own local music.”

Franco Juri, the singer of Istranova who went on to become a politician, credits Anglo-Saxon folk rock (Fairport Convention, Steeleye Span, Clannad) and Argentinian and Chilean socially conscious singer-songwriters and groups such as Victor Jara, Violeta Parra, Inti Illimani, Quilapayun and Atahualpa Yupanqui as his main influences. “Istranova was like a musical laboratory. Its core consisted of non-professional, self-taught musicians with a passion for Istrian musical tradition, a good feel for music and a reasonable ear,” he adds.

After initial experimentation, they began delving deeper and deeper into the musical heritage of Istria, not only via old records, songbooks and archives but also by going around villages, meeting locals and learning from them.

Juri explains: “We were inspired by Istrians who still sang and played old Istrian songs. We didn’t just like their music, we loved listening to their stories, drinking their wine and eating their prosciutto. We showed our gratitude by involving these musicians in various events and projects; we became friends. We were introduced to musicians who played bajs, sopele, mih and šurle and to people who were making these instruments. We regularly purchased instruments from them.”

Istranova laid the groundwork for further explorations of Istrian folk music, which had previously been completely marginalised and almost completely unknown, and created a repertoire which is to this day used by not only contemporary folk singers and musicians, folk revival groups and folk dance groups, but also by younger generations of musicians discovering, transforming and appropriating the sounds that the members of Istranova encountered almost four decades ago.

With their musical interventions and modern ways of music-making, Istranova made a respectful but bold incision into the fabric of traditional Istrian music and stitched it into the context of contemporary popular music, while also enabling Istrians to discover new ways of identification with their surroundings and its diverse forms of music which are often defined as “Istrian music”.

Singer-songwriter Rudi Bučar, who was a friend of late Luciano Kleva, a member of Istranova who introduced him to folk music, is a popular and recognisable artist in Slovenia: “Even though my records mostly consist of original songs, I write songs in Istrian and often add Istrian elements to them, such as minor thirds, Istrian scales and the like. I always take Istria with me. I have gone on multiple musical journeys, but every time I come back to Istria, it welcomes me back with arms wide open.” By the way, Rudi has a master’s degree in jazz singing at the Conservatory of Music in Trieste, he played in a grunge band as a teenager and has been a fan of Thelonious Monk since his student years.

Istranova was all about looking for unconventional ways of making music and finding alternatives to a uniform, stifling social reality. Its cosmopolitan stance and opposition to nationalist tendencies, a constant burden to folk music, echo to this day. Franco Juri adds: “I think that the subversiveness of Istranova lays in the fact that its exploration of folk tradition eschewed folklore and especially mono-national discourse. We chose the path of multiculturality/interculturality because we perceived ‘contamination’ with other cultures and languages as a blessing, not as a threat. After all, we were from mixed families ourselves. It was impossible for us to understand Istria as anything else than a space where different ethnicities and languages blend in a very potent way. That was the most charming thing about Istrian music, which is why the nationalists didn’t like us, since we represented the exact opposite to everything they aspired to. They wanted to create a new boundary and we kept transcending and erasing it. And music played a part in it.”

In an era of proliferation of fake news and the new advent of nationalist ideologies and mythologies that strive to cleanse folk music of its essence,  Istrian music is not immune to external faultfinding. As a conglomerate of local Slovenian, Croatian and Italian dialects and cultural traits, it is “not Slovenian enough” for many conservative cultural and political currents, explains Marino Kranjac, one of the later members of Istranova and currently the leader of a band called Vruja.

Emil Zonta, Istranova’s producer, remembers how in the eighties he had to translate all of the band’s lyrics, in their numerous dialects and languages, so that the authorities could keep tabs on the content. Times change, but some stories keep coming back.

Nevertheless, the story of Istranova and its legacy in the 21st century remains a seed from which a new generation of folk can always grow on culturally, ethnically and linguistically ever-changing margins, regardless of the political preferences, (dis)approval or indifference of the centre.