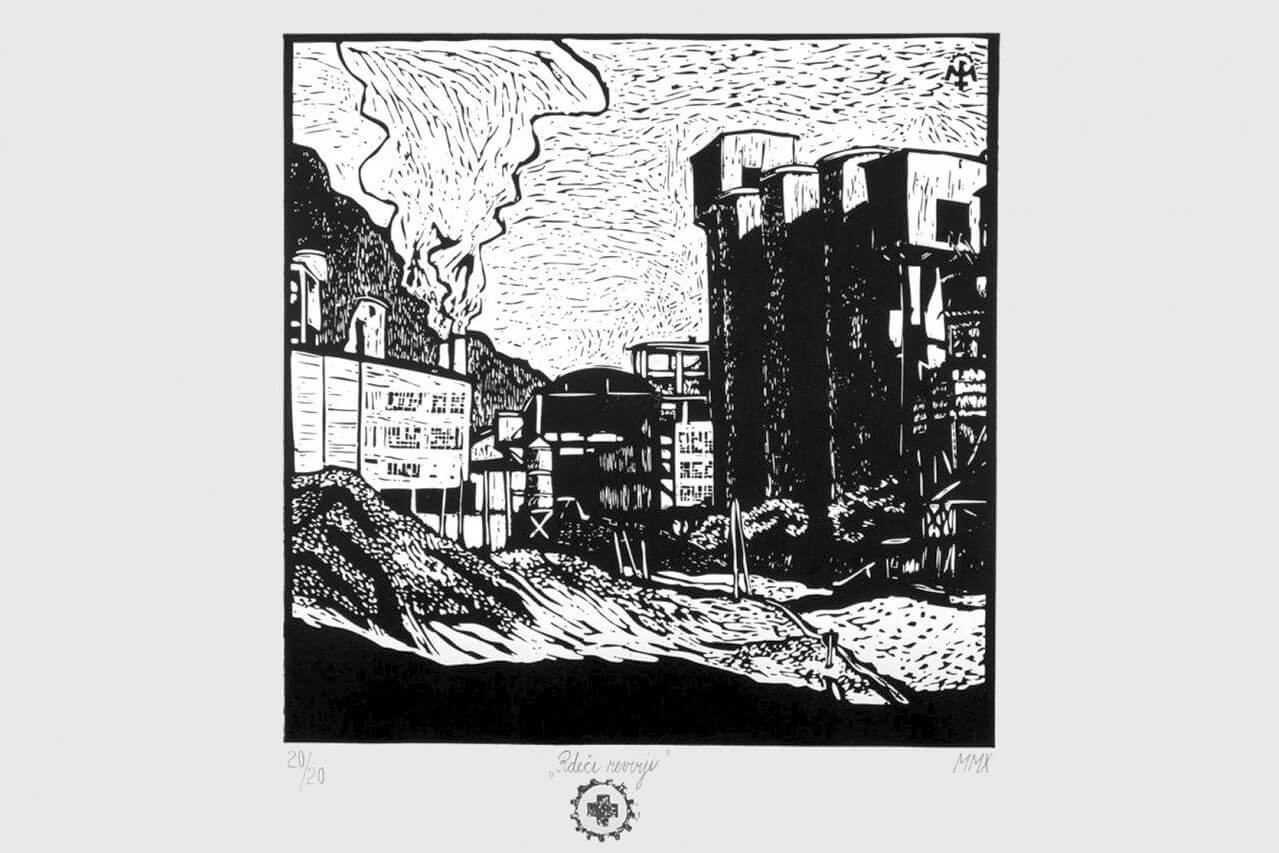 Please note! This is merely hypothetical. Just some random thoughts. Just words on paper. Here I am, dreaming, doodling, thinking, looking at the map and all four corners of the sky. Where to go, what to do? I’m thinking about what’s worth seeing and I’m trying to think of interesting people with stories to tell and things to show. I’m drawing lines on maps, calculating kilometers and minutes which turn into hours.

All the while, I keep asking myself: would anyone even consider going on a music(!) tour like this? Would I myself go on an organised half-day, whole-day or two-day tour of Slovenian roads and towns, of the country’s musical topography, of its enthusiasts and venues? With every thought, more doubts and second thoughts arise. The only answer seems to be action, so I get to work and let my imagination run wild. Again, please note that this is all just hypothetical! It’s a test, a little survey.

And just when I dig in, a message hits my inbox. It’s SundayNoise with Tom Jackson and Vid Drašler at the municipal cultural centre in Bistrica ob Sotli at 6 p.m. on Sunday, 16 February! Thanks Mitja, great timing with the email! I think I’ll use it to put together a sample day trip from Ljubljana to Bistrica ob Sotli and back again. To get off the couch, one needs to have a specific goal!

Before we set off, we take a look around one of the loveliest concert venues in our part of the world. While we get to know each other, we take a walk through the musical history of Jože Plečnik’s architectural masterpiece, with the words You are fleeting, only your works preserve your memory engraved over our heads on the arches above the entrance to the auditorium.

Even though concerts are also fleeting, numerous have taken place on this stage, from ballet and classical music to jazz, rock and roll to pop. As part of Festival Ljubljana, Jazz festival Ljubljana, Novi rock, Druga godba and other festivals or as solo shows. Križanke also houses the Secondary School of Design and Photography, where generations of artists have been educated, among them Laibach. Our trip will take us to Trbovlje, where the story of Laibach began, so it’s best to get going!

We turn on the engine and the radio starts playing songs by musicians who have performed at Križanke. En route, the playlist follows music by Slovenian artists who played at Novi rock between 1981 and 2000. Next stop up, Spodnji Hotič pri Litiji, where the first of three Zgaga Rock festivals took place in 1996. If there’s a Woodstock in Slovenia, it has to be Zgaga Rock Festival, both because of its organisational slip-ups and the overwhelming sense of a genuine rock and roll community that pervaded it.

1st stop, in front of the Museum of Too Modern Art, 45 min

We meet up with Tomaž Dernovšek – Vinči, the initiator of Zgaga Rock festival and the curator of the Museum of Too Modern Art. He welcomes us at his farm, shows us around, museum included, and takes us to the field where Zgaga Rock took place. On the way there, he shares memories and anecdotes of the »wild and crazy« two-day event, where, in addition to the legendary American underground rock and roll band Dead Moon, numerous bands from Slovenia, Croatia, Serbia and Bosnia and Herzegovina performed (KUD Idijoti, Kojoti, The Stuff, Džukele, Goblini, Strelnikoff, Metropolis, CZD, Indust-bag, Pridigarji, Baby can Dance, Dicky B. Hardy,  Overflow, Zablujena generacija, Hic Et Nunc, Orlek and so on).

The first Zgaga Rock Festival was a crucial moment for the future of music festivals in Slovenia. It changed everything. It triggered the rebirth of the Rock Otočec festival near Novo mesto in 1997 and was the catalyst for many other music festivals that sprang up all across Slovenia.

Moving on! Orleki from Zagorje, Agent’s Limited from Hrastnik, Pihalni orkester SVEA Zagorje and the like are playing their sweet melodies. We are on our way to the land of red, namely to the mining town of Trbovlje next to the Sava River. Vili Fajdiga’s subalpine blues and Hiša’s folk rock testify to the fact, as does Laibach’s industrial rumbling.

We take a walk through the industrial town at an hour usually reserved for the traditional Slovenian lunch (beef soup, roasted potatoes and roast meat, lettuce in a common bowl). We discover its rich history, suffused with the blood, sweat, tears and resistance of the 20th century, and are guided by monuments and memorials to the events before and during World War II (clashes between Orjuna and the communists in 1924, the establishment of the Communist Party of Slovenia in Čebine near Trbovlje in 1937, fierce resistance against the occupying forces in Trbovlje, which was a part of the German Third Reich). After World War II, Trbovlje was envisioned as a showcase town for socialism, but this plan changed with the 1958 Trbovlje strike, the first one in socialist Yugoslavia. This rich history of resistance was the foundation for the genesis of Laibach, its logical culmination.

On our way from the mining country towards Rogaška Slatina, we drive through the Žalec – Celje – Laško triangle and put on some music by bands from this neck of the woods such as Epidemic Zone, Strelnikoff, Phone Box Vandals, Baby Zdravo, It’s Not For Sale, Interceptor and The Stroj.

3rd stop: a visit to the Folk Museum in Rogaška Slatina

The Folk Museum is part of Ana’s Mansion, a cultural and tourist centre managed by folk artist Nani Poljanec. He introduces us to the history of Rogaška Slatina, its local peculiarities, landmarks and celebrities. We also examine the collection that focuses on the Karađorđević royal dynasty, which ruled the Balkans between the years of 1811 and 1945, and the philographic collection, which consists of original signatures and autographs of notable individuals, but also of various curios such as the dress that actress Milena Zupančič wore in film Cvetje v jeseni (Blossoms in Autumn, 1973), a letter from a certain Nikola Tesla, Prince Andrew of Yugoslavia’s tailcoat and Laibach’s Tomaž Hostnik’s passport.

During the half-hour drive, we warm up for Bistrica ob Sotli, a town with a vivid music scene. We listen to some songs by local bands such as Zmajev rep, Malik, Mana, Brencl banda, Psihiatrija, NoCENZURA, The Ghen and Social Blue.

We cross the border between Slovenia and Croatia. Get your passports (or ID cards) ready!

5th stop: Kumrovec, a guided tour through the building of the former Political School

Since we are already familiar with the Kadađorđević dynasty collection, let’s also check out the crumbling legacy of Tito’s Yugoslavia. What better way to do it than to visit the Political School in Kumrovec, the main educational institution of Yugoslav communists, which was built in 1981 and lived a very short life. The future of the complex is uncertain, but we can sneak a peek of its 380-seat grand hall, five offices, library, restaurant, 150 rooms, sports hall and fallout shelter.

We cross the border between Croatia and Slovenia again. Passports!

Time to hang out with the members of Club Metulj. Andrej Černelč, a musician and the editor of a book titled Rock ob Sotli (Rock upon the Sotla river), tells us all about the activities of the Youth Association of Bistrica ob Sotli and the history of this culturally and musically rich town.

And finally: back home, full of impressions, with new acquaintances and an earful of good music. The soothing sound of the wheels plays us out.

What do you say? A lively 12 hours? Would you go on a tour like this? Please let me know by filling in this questionnaire: