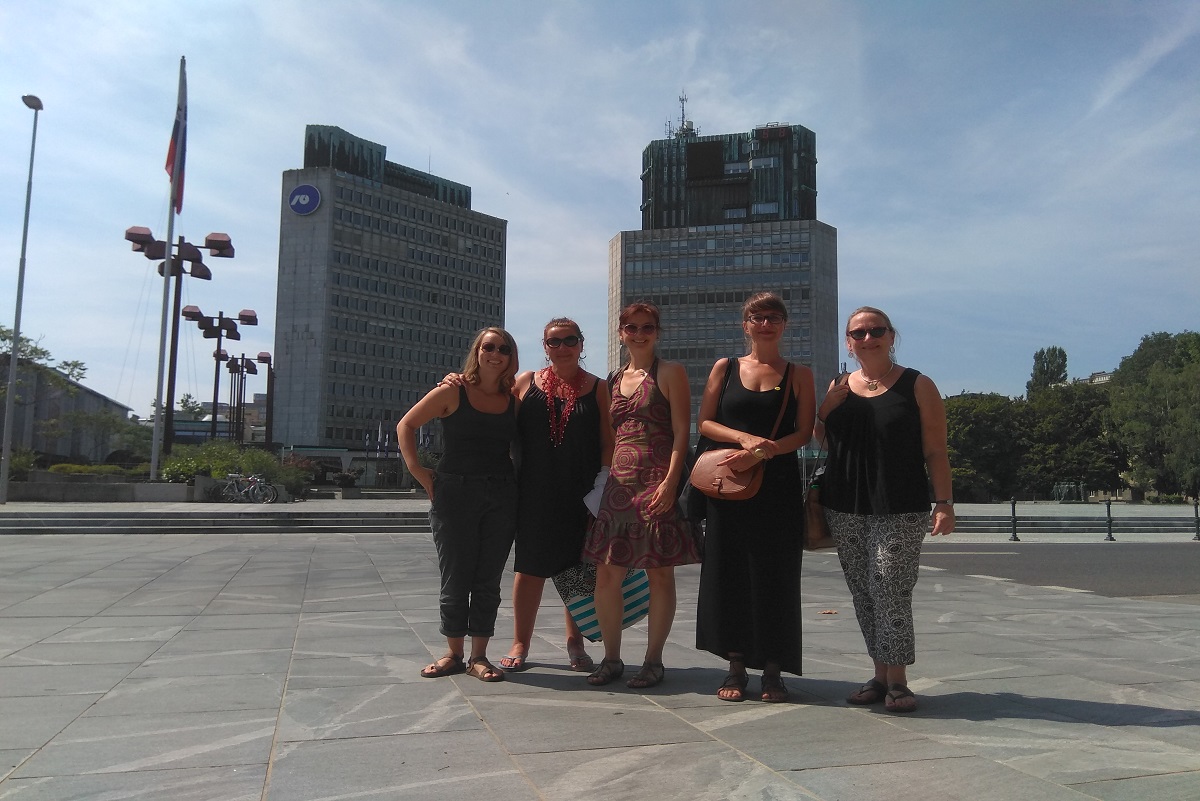 Last week we were delighted by an unexpected invitation. The Amnesty International Slovenia team, led by director Nataša Posel, who joined  our feminist tours a few months ago, invited us to a festive event at the Ljubljana City Hall. There was also a discussion there about a topic that is very close to us: Ljubljana’s monuments dedicated to women.

At the event, Amnesty Slovenia, represented by Ms. Posel, and Amnesty International, on whose behalf the founder of their global program Art for Amnesty Bill Shipsey came to the event, handed over a bust of Eleanor Roosevelt to the City of Ljubljana. The statue was received by Deputy Mayor Aleš Čerin, in the presence of journalists and guests, who also thanked the Slovenian and international branch of Amnesty and the author of the statue, the Czech sculptor Maria Šebrova.

Although it is not yet known on which public site the statue of Eleanor Roosevelt will be erected, it is already clear that this will be an important tribute of the City of Ljubljana to the chairman one of the most influential members of the UN Committee that adopted the Universal Declaration of Human Rights. This year marks exactly seventy years since that important event, and this is how Ljubljana is commemorating it. 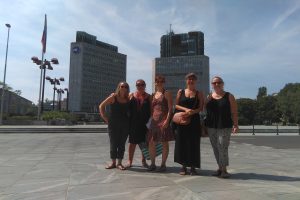 Eleanor Roosevelt is known as one of the most politically and diplomatically active partners of U.S. presidents, as a fighter against poverty, for workers ’rights, and for the rights of African Americans, the keynote speakers stressed.

A year after she and her husband Franklin D. Roosevelt left the White House at the end of World War II, President Harry S. Truman named her a U.S. delegate to the United Nations. There, in 1947, she became chair of the UN Commission on Human Rights and made an important contribution to the creation of a fundamental document for the equality of all people on this planet.

The event at Ljubljana’s City Hall was also attended by Eleanor Roosevelt’s granddaughter, Laura Roosevelt, and Laura’s daughter Truda. Speaking about her grandmother, Laura Roosevelt highlighted her efforts to promote human rights not only in the United States but around the world.

Thus, it is not surprising that Eleanor Roosevelt also visited Ljubljana five years after the adoption of the Universal Declaration of Human Rights. We could therefore say that the erection of the statue in her memory will also be her symbolic return to our city.

Eleanor Roosevelt is considered in some circles not only a pioneer of the struggle for human rights, but also one of the most important fighters for the social equality of women. In this sense, we were not surprised that Laura Roosevelt, otherwise a respected visual artist, and her daughter, expressed a desire to take part in our feminist tour of Ljubljana.

With the honor of the entire Urbana Vrana team and the great joy of Jasmina Jerant, co-author and guide of the Ljubljana Feminist Tour, we went for a two-hour walk on Wednesday, August 8, in beautiful sunny weather. In addition to esteemed American guests, the tour was also attended by Mateja Demšič (Head of City of Ljubljana’s Department of Culture), Bill Shipsey (Amnesty International) and a representative both of Amnesty Slovenia and Urbana Vrana.

After the tour, Amnesty Slovenia wrote on social media that Jasmina Jerant left a lasting impression on the guests from America and everyone present by revealing the hidden female face of Ljubljana, while “Laura and Truda Roosevelt are already thinking about having such a great tour in their home town, too.”

Amnesty Slovenia “really recommends” the tour, because you will learn “a lot about women in Ljubljana, today and in the past.” Jasmina enriches the tour with an abundance of colorful details, opens new perspectives on the city and makes the tour thoroughly relevant for these times. And on top of that, you can find out why Slovenians say “we have potatoes” when we’re lucky, and who the “crazy countess” of Ljubljana was. And many more. “At the end, Amnesty Slovenia recommends: “Go on a tour, take someone else with you, spread the word! ”

On this beautiful occasion we humbly express our gratitude to Laura Roosevelt, Amnesty Slovenia and the City of Ljubljana for their trust. 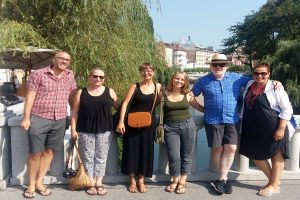 In the photo: Laura Roosevelt is second from the left and her daughter Truda is fourth from the left; on the far right is Mateja Demšič, Head of the Department of Culture in the City of Ljubljana, and next to her is Bill Shipsey, founder of the Art for Amnesty project at Amnesty International; third from the left is Jasmina Jerant, co-author and guide of the Ljubljana Feminist Tour, and on the far left is Gregor Bulc, the founder of Urbana Vrana.